With an 80% state-wide coverage, Redwave Media gives you fast access to a captive radio audience via one convenient point of contact.

Our two regional radio networks, RedFM and Spirit Radio, reach consumers from Wyndham in the far north through to Bremer Bay in the south. We broadcast to regional WA towns PLUS remote mine sites and some oil & gas platforms.

RedFM’s music format is Top 40 and more music that covers the major towns of Broome, South Hedland, Karratha, Geraldton, and everywhere in between, including most mine sites. RedFM’s target audience is the 18-39 age group.

Spirit is music from the 70s, 80s, 90s and today’s hits that covers the major towns of Broome, South Hedland, Karratha, Geraldton and the South West, plus inland regional towns and mine sites. Spirit radio targets the 30-54 age group.

Redwave Media has a number of artists available to voice radio commercials for clients.

Why Advertise with Redwave Media? 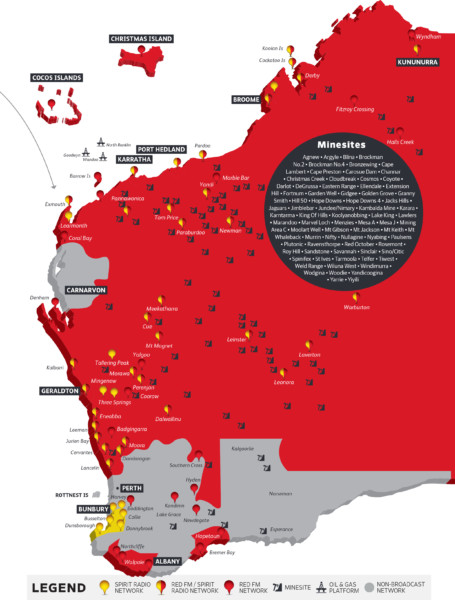 Imagine your advertising message broadcasting from Wyndham in the far north to Bremer Bay in the south, reaching a high-socio economic landscape with the lowest unemployment rates out of all mainland states.

Redwave Media’s coverage extends to 80%* of the state, making us the number one marketing choice for regional WA.

Our regional radio networks are heard in up to 120 regional towns and mine sites and everywhere in between, entertaining locals and fly in, fly out (FIFO) workers with everything from music, news, fun, contests, weather, road conditions and emergency information.

Redwave Media’s regional radio stations are the only commercial offerings in most regions; a point made more valuable when you consider that 78%* of people prefer commercial radio over community/government alternatives.