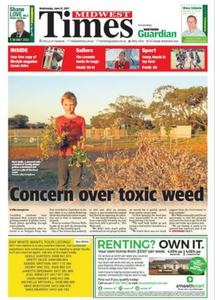 The Mid West is one of the fastest growing regions in WA and is rapidly becoming WA’s newest resource and renewable energy centre. It’s major towns are positioning for phenomenal growth in every sector from farming to mining and alternative energy sources.

Stretching from Jurien Bay in the south, to Meekatharra in the East and Kalbarri in the north, the Mid West is a vast and strongly populated area – with some 40,000 inhabitants. The Mid West Times is a free weekly paper distributed to every household and business and has been continuously published since 1992.